Past events » Marieke Nijkamp, YA author

I’ve had the privilege to be part of some amazing conferences and festival, both on the program and as volunteer. I’ve noted some of the highlights here (mainly because my memory is a sieve and it’s cool to have a reference :D)

My second book came out in 2018, and so did the first anthology I edited! I spoke about books in four different countries, which is still absolutely wild to me. I also ended up doing three comic cons in London in one year. (Shout out to MCM and YALC/LFCC!) 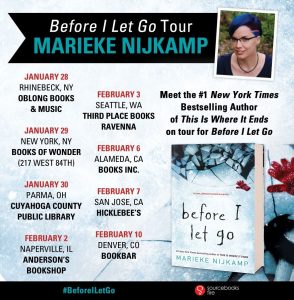 In 2017 I was one of the featured speakers of the Book Expo Children’s Author Breakfast, which was extremely cool! I also spoke at BookCon! I spent time in Helsinki for WorldCon75! I returned to Dutch Comic Con! And then there was that time I got snowed in at a train station! …I guess you should’ve been there. 😉

I also really should’ve kept a list of the various panels I was a part of. Whoops. (This year did see the birth of con hotel D&D sessions though. Always bring dice when you travel.) 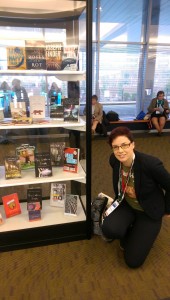 2016 saw the release of my first novel, THIS IS WHERE IT ENDS. I spent time on the East Coast to promote it, was part of ALA Midwinter’s debut author party, and also had the pleasure of launching the Dutch translation of the book.

This Is Where It Ends launch, Books of Wonder, New York

Come help Marieke Nijkamp celebrate the launch of her emotional and suspenseful debut novel This is Where it Ends.

The panelists, from exciting debuts to established NYT-bestselling authors, are all committed to diversifying library shelves, one book at a time. After a discussion on how their books add to the diversity of children’s literature, the authors will discuss how best to introduce LGBTQIA+ and disabled characters to library patrons. They’ll discuss issues of privilege, bias, and the importance of the ongoing need for these stories. With Kody Keplinger, Malinda Lo, Adam Silvera, Heidi Heilig, Marieke Nijkamp. 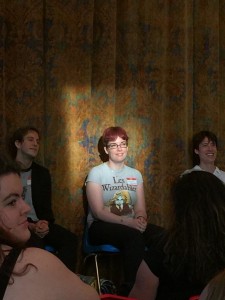 2015 was the first year I traveled quite a lot for my book and to talk about WNDB, and also because adventures are fun. I ran the YA track at Nine Worlds this year (and volunteered at a few other places) as well.

In which I talk about diversity, medieval maps, and the worlds we build.

With too many white, straight, cis, able-bodied heroes and heroines populating the pages of our books, diversity is a hot topic of discussion in the literary world, including the romance and the YA communities. But words alone are not enough; We Need Diverse Books™ is committed to change beyond the hashtag. At the We Need Diverse Books™ panel, we will provide concrete and out-of-the-box ways to truly make a difference for authors of all genres, as well as librarians, booksellers and publishers. Sona Charaipotra, Dhonielle Clayton, I.W. Gregorio, Marieke Nijkamp (moderator), and Natalie C. Parker

teen author carnival, new york city. is ya too dark?

bookcon, new york city. we need diverse books: in our world and beyond

The panel will showcase the best and brightest in Science Fiction and Fantasy when Hugo Award winners Kameron Hurley (The Mirror Empire) and Ken Liu (The Paper Menagerie), World Fantasy Award winner Nnedi Okorafor (Who Fears Death), Daniel Jose Older (Shadowshaper) and Joe Monti (Executive Editor of Saga Press) join together for a moderated conversation about the role diversity plays in the genre, their works and their influences. Miranda Paul (introduction), Marieke Nijkamp (moderator).

nine worlds, london uk. beyond the binary: gender and sexuality in ya

More and more non-traditional characters enter the YA stage. Characters who defy gender norms and gender binaries. Characters who fall somewhere along the LGBTQIA* spectrum. Characters who kick ass and take names. How does YA explore these new stories, who are the characters we should be paying attention to, and what is there still to come?
Juno Dawson, Tom Pollock, Fox Benwell, Lauren E James, Laura Lam, Marieke Nijkamp (moderator).

nine worlds, london uk. fantastic worlds… and where to find them

Making up an entirely new world can be complex, frustrating, and a lot of fun. Join these master worldbuilders as they discuss their worldbuilding process, the challenges they faced, and any tips they have for writers creating their own worlds.
Amy Alward, Joe Abercrombie, Den Patrick, Taran Matharu, Marieke Nijkamp (moderator), and more.

Author and editor Bill Campbell will talk about his latest project The Stories For Chip, a tribute to Science Fiction Writers of America Grandmaster Samuel R. “Chip” Delany. Following the presentation is a panel discussion about World SF and diversity in the speculative fiction genre with authors Zen Cho, Corinne Duyvis, Marieke Nijkamp and Rochita Loenen-Ruiz. 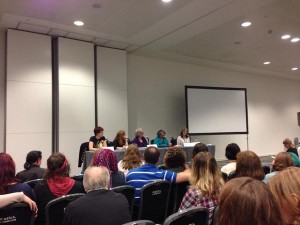 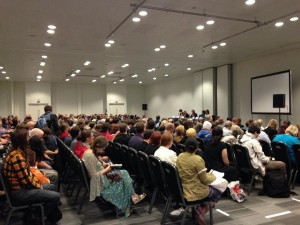 After taking the internet by storm, the #WeNeedDiverseBooks campaign is moving forward with brand new initiatives to continue the call for diversity in children’s literature. Join the WNDB team as they share highlights of their campaign, discuss the success of grassroots activism, highlight diverse books and how everyone can diversify their shelves, and talk next steps for the campaign.
Ellen Oh (PROPHECY series), Aisha Saeed (WRITTEN IN THE STARS, 2015), Marieke Nijkamp, founder of DiversifYA, Lamar Giles (FAKE ID), and Mike Jung (GEEKS, GIRLS, AND SECRET IDENTITIES). Special guests include Grace Lin (WHERE THE MOUNTAIN MEETS THE MOON), Matt de la Peña (THE LIVING), and Jacqueline Woodson (BENEATH A METH MOON). Moderator: I.W. Gregorio (NONE OF THE ABOVE, 2015).

High fantasy is almost invariably set in invented worlds inspired by medieval Europe. Can we put this down to the legacy of Tolkien and to genre works being in close conversation with each other? Or is there something about the place that medieval Europe occupies in our imagination that makes it a perfect companion for tales of epic striving and larger-than-life Good versus Evil? Either way, does this help or hinder the genre?
Kathryn (Kate) Laity (M), Suanna Davis, Robin Hobb, Marieke Nijkamp, Lynda Rucker.

LonCon3 (WorldCon), London. We Can Rebuild You: disability in science fiction

SF medicine regularly comes up with “cures” for disabled bodies — from Geordi LaForge’s visor to the transfer of Jake Sully’s consciousness in Avatar — but the implications of such interventions are not always thought through as fully as we might hope. How does a rhetoric of medical breakthroughs and scientific progress shape these stories, and shape SF’s representation of lived physical difference? In what ways can SF narratives address dis/ability without either minimising or exaggerating such difference?
Cherry Potts (M), Neil Clarke, Tore Høie, Helen McCarthy, Marieke Nijkamp.

From Earthsea to Noughts and Crosses, The Summer Prince to Akata Witch, children and teens need to see books with characters that represent the diverse world they live in, whether they are dystopian romance or fantasy adventure. Organisations like We Need Diverse Books are helping to promote diversity in children’s literature, but what actions can we take – as readers, writers, publishers, and book-buyers – to help them in their goals? And who are the great authors of the past few years we should be catching up on?
Marieke Nijkamp (M), Kate Elliott, John Hornor Jacobs, Rochita Loenen-Ruiz, Mary Anne Mohanraj, Mahvesh Murad.