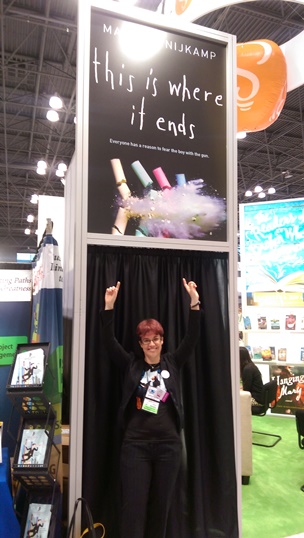 Where were you born? Where do you live?

I was born in the Netherlands and still live there.

How do you pronounce your name?

My first name is pronounced more or less like the Jacques Brel song. Or, if you want to be even more correct *and* hear me  pronounce it, hop over to Teaching Books!

Are you <insert identity here>?

I am white, non-binary, queer, and disabled. I have no pronoun preferences, so feel free to use whatever pronouns you like for me. Generally speaking, I use she/her professionally (because my native language is complicated when it comes to pronouns and I haven’t found the right pronouns yet) and they/them personally. Anything else is fine too. I occasionally talk about identity and marginalization on Twitter, so if you’re interested, follow me there.

How do I get in touch with you?

You can email me (mariekewrites at gmail dot com), use the contact form, or tweet me @mariekeyn. I try to respond to every email, but it may take me a little while to get back to you.

Will you do my homework?

Well… no 😉 I love it when schools discuss my book in class! I’m super honored that you chose my book for a book talk! But I can’t tell you how to interpret the book or what it means. That’s up to you as reader, and I think it’s important it stays that way. As for information about me, have a look around this website and the interviews below. I daresay you’ll find plenty.

On This Is Where It Ends

Can you tell me a bit more about This Is Where It Ends?

This Is Where It Ends takes place over the course of the fifty-four minutes of a high school shooting and follows four teens, who all have their own reasons to fear the boy with the gun.

What research did you do to write the novel?

A lot of it. For every hour I spent writing, I spent another (at least) researching. I read firsthand accounts of shootings, I listened to 911 calls, I plowed through hundreds of pages of investigative reports, I talked to people, I kept up with news and social media feeds as active shooter situations emerged, I familiarized myself with the psychology of being held at gunpoint. As much as possible, I immersed myself in what we know about school shootings (which is both a lot and not a lot at all). And I tried to translate that to the book.

At the same time, of course, This Is Where It Ends is still fiction. The story isn’t about the technicalities of a shooting; it’s about four teens in a harrowing situation whose world is being turned upside down. So I allowed for that, too, in the way the story unfolded. But I wanted to ensure that any poetic license remained respectful to real life.

Where can I buy it?

You can buy all of my books anywhere books are sold. For more information and links, please visit the book page.

On writing and publishing

How long does it take you to write a book?

Honestly? It depends. Some books are written over the span of a few months, others are stubborn and take forever. *glares at that one manuscript in particular* Of course, drafting a manuscript is only the first step. There’s revising, occasional rewriting, editing, feedback, critiques, more editing… And for me, that is where the book really comes together. I love this part of the process!

Are you a plotter or a pantser?

Plotter! I’m a plotter at heart. Before writing any story, I have to know what’s happening when, what the important threads are, and how to weave it all together. How I plot it depends per story though. For This Is Where It Ends, for example, I created a massive spreadsheet that tracked, minute by minute, what happened to each of the main characters as well as the shooter and several other prominent players. It allowed me to keep track of the various arcs of the story, as well as the way different scenes influenced each other. From there, I wrote the story four times, from all four different perspectives to keep the voices distinct, and only then did I start bringing it all together. For Even If We Break I had roughly five million note cards. The Oracle Code had a super detailed outline. Anything to make me feel like I have a good overall sense of the story before I jump in!

Where do you get your ideas?

I want to be published! What advice can you give me?

Persevere. Read Dahlia Adler’s amazing blog posts about the publishing process. And remember, publishing is a marathon, not a sprint. Find a trusted crew of writer friends (both people on the same level as you and people a few steps ahead) and keep trying, keep writing, keep going. And if you ever want a quick peptalk, tweet me!

How do you get over writer’s block?

By writing anyway. Or by daydreaming. Or by dabbling a scene from another point of view. And sometimes, by taking a shower or going on a walk or listening to the story’s playlist. I think the most important thing though, is to keep moving forward. As Albert Einstein once said, “Nothing happens until something moves.” An object in motion will stay in motion. So keep writing. Keep moving forward.

Who is your agent? Will she represent me?

My agent is Suzie Townsend at New Leaf Literary. You should probably query her. (I won’t refer you unless I know you, have read your book, and really truly believe you’d be a good fit.)

I’ve written a book. Will you read it and tell me what you think?

My book is being published. Will you blurb it?

My schedule is very limited, but if I have the time, I’m happy to look at books with an eye toward blurbing them. If I love a book unreservedly, I’d consider it an honor to blurb. Please do make sure your blurb request comes via my agent.

How do you feel about fanfic / fan art?

I absolutely, wholeheartedly adore and support fanfic and fanart. There’s no higher compliment for an author! Unfortunately though, while I can look at fan art, for legal reasons I cannot read fanfic.

Can I get an Advance Reader Copy (ARC) of your books?

Unfortunately I can’t help you with this! My publishers decide who gets or doesn’t get ARCs, so you should probably get in touch with them.

Can you tell me a bit more about DiversifYA?

DiversifYA is a collection of interviews that allows us to share our stories, all of us, across all marginalized experiences. DivYA isn’t currently being updated.

Can you tell me a bit more about We Need Diverse Books™?

We Need Diverse Books™ is a grassroots organization of children’s book lovers that advocates essential changes in the publishing industry to produce and promote literature that reflects and honors the lives of all young people. As one of its founding members, I served as Sr. VP of Finance for one term.

Where can I find some of your posts about diversity?

Take a look at the links down below.

Where can I meet you? Will you come to a town near me?

I travel quite a bit throughout the year, both for conventions and for individual events. You can find scheduled signings and other events on my events page. If you want to set up a signing, or if you want to invite me to a conference or convention, please don’t hesitate to get in touch!

Do you do Skype visits?

Can I interview you for my blog/newspaper/other publication?

If I have the time, I love chatting to people, so shoot me an email and I’ll see what I can do. Fair warning though, when I’m on deadline I may have to prioritize that. I still haven’t figured out a way to push more than 24 hours in a day.

Coffee all the way. I can’t eat (or drink!) chocolate!

Where can I find (even more) information about you?

Here are some assorted interviews: School Library Journal (2016), The Horn Book (2015), OverDrive (podcast, 2016), Disability in Kidlit (2015), Shelf Awareness (2016), Cynsations (2015), The Swanky Seventeens (2016), Tales of Yesterday (2015). For assorted guest posts, check out The Gay YA, Disability in Kidlit, The Mary Sue, Luna’s Little Library, and NaNoWriMo. In addition, you can find more recent interviews and articles on the various book pages.